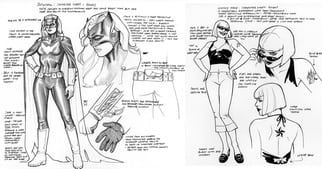 Despite being fictional characters, you may want to keep some sense of realism when creating them.We have, in other related articles, mention practicing exaggeration when drawing comic characters.Why not? Its fun, adds a certain uniqueness to the character and most certainly does not limit your art style. But keep in mind that adding more realism or anything that makes sense when creating a character can actually make the reader relates to a character evens better.

As the character creation process goes on, you must also consider how you want the character to look in the future.Every adventure has their conclusion and every story ends.Being on the logical side of things, a character will not be looking the same as when he started off. But this is comic, not everything is logical! True. But as mentioned earlier, it is better to add some sense of realism when creating a character. Being logical is something that most people can relate to and your character progression is no exception. When clothing and other equipment can be worn-out, your character still ages even if not physically. His mentality grows and your character has a more mature perception. All the things your character has experienced in the past can influence his/her perception, thinking, decisions and ultimately how the character looks. It is always helpful to have different designs for a character in different environments or settings.

Although your character is very likely to be the hero they will need weaknesses, and these can be anything. No one is perfect, and even the best comic book heroes can be defeated by something.Even Superman have weaknesses.Either physical or emotional, weakness can come in many form.Never make your comic character invincible.Invincibility or perfection can be perceived as boring and can even weaken the storyline.

It is very difficult to create something entirely original, but is creating something new just as hard?

When creating something original, a lot of research must be done so that the creation is not similar or the same as others of the type.In this day of age, we are expose too many different form of media, culture, history, and this makes it very difficult for us to create some original. We are not saying that you cannot create something original, but it is a very difficult and time consuming process. When you create something, be it a character or a story, you can be certain that if you trace back on how you get the idea, you will find that some of the influence to it are things that you have either seen, read or heard from somewhere.Some call it “inspired by” or “inspiration” but we like to call it “referencing”.

The reason is that making references to different ideas or creation actually “help” you in creating something entirely different or “new”. Making reference from other works are something that most character designers and concept artists are familiar with. They are used to gathering visual resources like designs, body shapes, fashion styles, animals and lots more to help them with their work. They do not copy the whole thing as it is but instead take elements and certain aspects of the resources gathered -for example the shape of a rhino beetle, muscle tone, or armor design- and combine them to create something new.Make no mistake, although making references are somewhat easier than creating something original, the amount of research necessary for it is just as much. The good thing about it is that the more you gather resource for your reference, there is a possibility that you will end with something entirely new or unique (original enough?)

One of the things that gets readers to get hooked to a comic besides the artwork and the plot, is the character’s detail or characters development.To make your comics work, never hope on the artwork alone to get people to follow your comic.Solid storyline, amazing artwork and of course, great characters are essential in making good comics.Working out the plot and timeline in place is one thing, but creating a believable character to that fits in the storyline is a different thing entirely.In order to get the character moving with everything else as the story progresses and at the same time creating a strong character development, you must start from the absolute basic – character creation.

To start off the process of creating a character, you must be able to tell the readers what the character is all about.One of the simpler way to do this is by asking yourself these simple questions.

Who is this character? Who is this guy/gal to everyone else? If this character has dual identity in similarity to the case of Batman or Spiderman, tell out the name of both the real name as well as the superhero name.

The timeline when the story takes place.

This is usually the place where the event that changed the character took place.The origin of your character.

This is where it’s going to take some time. The “why” is basically a background story for your character.This summary is where you can explain details of your characters.You can also point out his/her perception, motivation and goals if you want.and how he/she like to handle things.

This is where you can explain on how your character likes to handle things or point out how the character changed after an accident or how the character’s power works.It is alright if you have already mentioned some of the details in the “why” section.

With the six questions above, you can basically create your very own character from scratch and actually have a basic understanding of what the character is all about.With this, whenever anyone ask you about a character you created, you can easily tell them about it.The point is to have a basic idea of your character that you agreed on and is believable or understandable by others as well.

Most would think that the coloring part of comic creation is an easy process. In some cases, it is, but the problem can actually start before you start coloring. You must start at the absolute basic of it which is deciding on the colors – ignore this and you can expect a lot of bumps and hiccups along the way. The coloring process includes color schemes, inked drawings, flat colors as well as highlighting. We will not be going into all that now. (We will be doing that in the step-by-step comic creation process – the coloring section).

There is a lot of things to consider when choosing the right color for your character(s). From the color of the skin, hair, eyes, clothing, gadgets, accessories, and much more. But before you decide on which color to use for any of these, have a look at the complementary color wheel below. 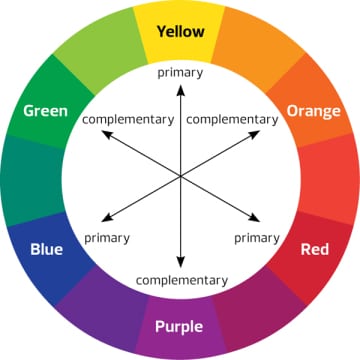 Complementary colors are different sets of colors that “stands out” from another set of opposite colors or a color that “complements” and works well with another opposite color. In the color wheel, yellow is the opposite of purple, green the opposite of red, which means that yellow works well with purple and helps makes the object with the color “stands out” more. Same goes with the green and red. This is because the complementary colors are not of same color values.Lets see how this works.

Now lets change the color of the clothing to blue and now you can see that the character does not appear attach to the wall anymore.The advantages of complementary coloring helps the character “stand out” from the background with just a simple step.

Deciding on the colors first helps you figure out which part of the character you to give out more for people to see.This usually involves several colors, more if you include shading ( maybe a bit less if your character is a superhero). The image of the complementary color wheel above covers mostly the basic colors.If you are looking for more detail on complementary colors, head on to colorschemedesigner.com. Color Scheme Designer.com has a better and more detailed color values that you can work with and you can also adjust the themes to what suit you best.
For more on coloring comics – CLICK HERE.