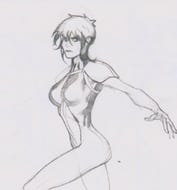 Creating a well balanced character can be quite simple and straightforward at the same time.One of the most common mistake made by beginners is to point out only the best side of the character and at times not pointing out the flaw.
Balancing a character traits, personality or even the design is to counter the best qualities or features of a character with the flaws or weaknesses.

A good sense of overall balance in your character, be it in his/her personality, features or even the design, is something that you must be able to have when creating a character.We mentioned before on how a character’s perfection can be boring and have a risk weakening other characters or even the storyline.This is because when one character is able to do everything alone, it would make other characters irrelevant or useless and the opponents would not stand a chance against such a character.When this thing happen, it can “kill” the readers interest on the story and maybe even the future of the character.

It is very rare for a character to have a weakness without a story behind it.Almost every comic characters have a story on how the got the skills, powers or abilities and the same goes for weakness or flaws.This can be a side effects of his or her powers, overexposure to certain environments, a stroke of bad luck, to experiment gone wrong, betrayal or tragedy in some point of the character’s life.

Each genre has its own qualities and standard that fan/audience of specific genre can relate with. For example: if you are going for a sci-fi genre, then the relevance to that would be aliens, lasers, futuristic weapons or devices, and spaceships.Same goes for fantasy genre that is synonym with medieval like settings like castles, dragons , open field battles, swords and bows.Genres are similar to archetypes in a way that they are many different types but are set in categories.Some of the common genres of comics are:

So far, we have covered mostly on the character creation process and basically what you need to create your own character.

Let’s take a break for a while and look into your target readers/audiences.The reason we mention this after planning and basic construction of a character is because we do not want you to be on the safe side and restrict yourself from giving out great ideas and style just to cater to what the audience or readers wants.We encourage you to create characters from your perspective and figure out which group your character and storyline belongs to.There are two point in this that you need to know when it comes to your target audience/readers.

Why you need to know

We have separated the age groups and give out a rough example or summary/criteria which we think suits the respective age group. (This may be different from how others might see it but this is just an example of what we at Creative Comic Art agreed on)

Child (4-11 years old) – Their bodies still have simple shapes with not so much detail.The same size for the head and medium size eyes.

Teen (12-17 years old) – Characters are shown to be more believable.They have a more realistic body proportion and show more details.Shading is used more and includes cool and warm colors.

Adult (18 years old and above) – Characters appear most realistic.Evenly proportioned and the details are accurate and very clear. Different darkness of shading and wide combination of color are used.

You should always know which target audience and which age group you are going to go for.This is mainly because you need to know the standards that each age group demands and not deliver any less or go overboard with it.Think of it this way: if you are creating a character for yourself, you do not need to think about what others might think of it because it is a character that you like.But if you want create a character that is agreeable or acceptable by other people, then you need to see it from their perspective and know what they prefer to have in a character.

Another reason to know your target audience is because you do not want to create a character for the wrong age group.This can be disastrous.Imagine if you created a character who is something like a psycho-serial killer type and you plan on marketing that character to the 4-11 year old age group.That would be a bad call because the character is not meant for the target audience and does not meet the age group standards.Therefore, you should make sure that the characters your create belong to the right age group.The normal approach on this is to choose the age group, be creative and work your way to the acceptable standards given.

What we recommend it to choose the age group based on your art style.If you are good at drawing cute and adorable cartoon characters, the toddlers and child age group might suit you.But if you have a thing for drawing realistic and believable characters with storyline that includes violence and gore, then try working on the adult age group instead.

Aesthetic is one of the biggest thing and most important part of character creation.Aesthetic is basically the visual impression of a character.This is very important because the looks of a character can determine what the viewers would think or feel about the character.Human being are almost always attracted to things that are visually pleasing and naturally wants to know more about it.This is no different for comic characters.When the viewer/audience sees an interestingly attractive character, they want to know more on what the character is about.

So, how do you get the best when it comes to the aesthetics of your character?

The good thing is, we have covered most of what is necessary for that already.Since we are doing a two part character creation process(planning and designing), we will have the same approach toward a character’s aesthetics .Now let us do a little recap of what we have done and what we will be doing in the designing process that contributes to the aesthetics of a character.

Now, lets take this to another level, which is also one of the most important steps in the character creation process. Here is where your must decide on your character for the last time. This is the deciding process. There can be no more changes after this and any alterations or tweaks on your character must be done now .Always remember this. Decide on the one thing for your character. Be specific. You may get away with a couple of options for your character but never for several things. Too many choices can often make it difficult for you to decide on what suits the current character you are creating. If you have tons of ideas or options for a character, choose one and leave the rest for other characters you are planning to create. The reason you must decide on all these is so that you wont stray away from the original character concept design when you are into the designing process later on.