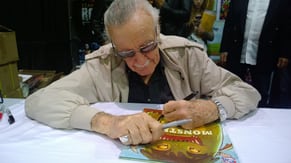 Before we begin, we would like to point out that some of the things that are being shared here may seem to be common knowledge to most but we decide to put it up anyway for those who do not understand the usage or are not aware about it, so your understanding in this matter is appreciated!

When we start to think of creating comics, we cannot help but think of the revenues we can generate. Most would say that this is not the right attitude to start with and how such perceptions can make you lose focus or miss out on the important parts of creating comics, such as the pure artistry. But let’s just be honest with ourselves and admit to the fact that the one of the main reasons you are publishing your work is so that you can sell it, profit from it, and get your work known by the masses.

This can be difficult especially if you have just started and your work is pretty much unknown. Creating comics, art books, works of art and publishing them can cost a lot, and like everything else, requires hard work. It is a good thing to know what it takes to successfully publish your work and profit from it. Instead of just publishing your comic book and making money off it, we would like to go deeper than that and share what we know will benefit you in the future. In this section, we will touch on three important parts: Reputation, Marketing, Sales.

Let’s start with establishing yourself and making your comic books known to the world: Reputation.

Fame, prestige, prominence, notoriety, whatever you want to call it, you are going to have to work hard to get your work well known. You must realize that you are not only building your reputation but you must also benefit the most from it as well.The reason we are doing this is to show you the very basic way of building your reputation.It is a pretty straightforward process but also requires your full attention. First off, lets start with the most obvious.

A pen-name or nickname is the name that people can identify you with from your work.In other words, this is the name that is going to represent you on your work. You could use your real name , a simplified version of your name, a nickname, or an entirely unrelated name that you think would best describe and fit you.

The easier part of this is creating the name, but the hard part is to maintain that name with all the reps that it’s going to accumulate.As easy as it is to come up with a nickname or artist name, it is also just as tempting to change your nickname for a lot of reasons. Maybe you have just thought out of a cooler name, or a name that relates to you better.In any case, It is alright if you have just started out (a few month) and decides to change you nickname (just be sure to tell people about it) but if you have been using that nickname for some years, it is best to stick with it.It is not going to work if you change you nickname for every comic work you have done so far.This is obviously because the reader or viewer will not know that the same comic work is from the same comic artist.They will not give credit to you as much because they will think that it was not your work.

Sharing your work is a good way of getting the attention of people interested in the work of your art.Sharing your works of art does not necessarily mean sharing your finished artwork.You can also share with people the process of the artwork.For example, you can give a short tutorial on how you draw hands, or show the doodles/sketches that you do in your free time and give a short note on what goes through your mind when you draw them. Share the experience with them.This will make the visitors of your site give their best attention to you as well as your artwork, and will encourage them to return to your website or blog for more tutorials and how-to’s.

This is one of the methods to get your viewers or fans to be interested in you mainly because you are creating a connection by communicating with your viewers and giving them simple lessons.Much like the relationship among lecturers and students. By sharing opinions and advices, it can really increase the interest of your viewers or readers on what you do.

Collaborating or working with other comic artists

You do not have to wait for someone to contact you for a collaboration or as a project partner(they could be waiting for someone to contact them too). You could also make the first move and ask other comic artist for a team-up instead, just make sure that you have a solid plan or project to work on together. Because certain comic artist have certain skillset or specialization like a colorist, inker or penciler, there is a possibility that more than two other artist could join in a single project or comic artwork.

Another good way to get known for your comic artwork is to be a guest artist on a webcomic. Look for a webcomic that fits your genre or preference and ask the author or artist (whoever is in-charge) for a place as a guest artist. Make it clear on how things can work out and most webcomic would be more than happy to have you in for a short stint in their webcomic. Just do not push too much on being accepted and do not take rejections personally. We are sure that webmasters (the site owner – most likely the artist) have their own reasons to accept or decline your participation or work and it is not right for us to jump to conclusions about it.

By collaborating or being a guest comic artist, you are making yourself known to the fanbase and supporters of other artist. You are, in a way, advertising your skills and artwork to them.

Recreating some of the popular designs are a great way for you to show your talent as an artist. There are artist out there who demonstrates their versatility in their art by sharing their own version of character and vehicle designs from popular movies, cartoons and comics.

You can do this by taking a character from popular movies, comics, anime, or TV series and redesign the character with a little bit of a twist coming from your own style, perspective and genre. For example: you could design a darker, grittier version of storm troopers from Star Wars or a realistic take on superheroes fighting a villain and his cohorts. This is also one of the best way for you to exercise your versatility on creating character designs as most of the recreations are based on existing characters in different types of genre (sci-fi, fantasy…etc).